In 2005, when New Zealand won hosting rights for the 2011 Rugby World Cup the negotiators had promised the event would be supported by a stadium of 4½  million – New Zealand’s population. They were confident – rugby is embedded into New Zealand culture and for many New Zealanders it is an integral part of who we are. The All Blacks are established as a strong rugby brand, both domestically and internationally.

Economically, New Zealand is marginal as a host country as the population doesn’t support large stadia and the New Zealand Rugby Union is facing a significant financial loss. 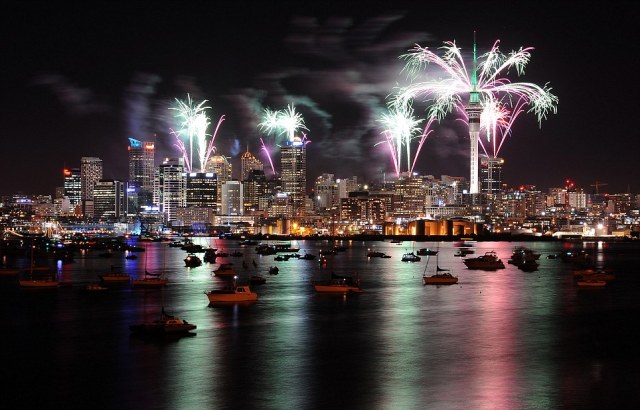 But the World Cup has been a massive success because of the engagement of the nation. In the days leading up to the tournament’s opening flash mob haka happened around New Zealand and other parts of the world. And here’s cell phone video of “flash waiata” as a group of young men make their way to the Fan Zone. The opening ceremony was stunning. For me, even more impressive was the co-ordination of fireworks, container cranes, an orchestra, pipe band, singers and musicians at multiple locations around the Auckland waterfront in a stunning follow up to the opening ceremony. The lyrics of the song “All lit up”, (7.50 minutes into the opening ceremony video) delivered by a choir at the top of a high rise, accompanied by the New Zealand Symphony Orchestra, speaks to me of a cultural shift in our nation:

And fans turned out to neutral games in cities around the country and adopted teams to support.

The success of the tournament is based on the effective collaboration of a multitude of partners, including the International Rugby Board, the national and local rugby boards, national and local government, and many others. The organisers have forged a network of collaborators and created a range of events to support the tournament. The synergy between the core rugby events and a diverse range of other events throughout the country helped to build excitement, energy and a sense of connection. The Real New Zealand Festival, co-ordinated events throughout the country.

Visitors to the country have been fulsome in their praise of the event and the hospitality experienced in New Zealand.

From an engagement perspective, what lessons can we learn?

Rugby is part of the DNA of our nation. The story was already there to be told. We won the inaugural World Cup in 1987, but despite being usually ranked number one in the world, we were unable to secure another win. Stories create meaning. Our impending win is not just about winning a sports tournament – it’s about national redemption. While that might appear a little melodramatic, the lesson for business is that the story generates meaning and motivation. The best businesses engage the hearts of their employees in support of a mission they get to own themselves.

We are a small nation, but we are great at rugby. Three of the four semi-final head coaches are kiwis. Our pride is embedded in the results of the games and also in the quality of our organisation of the tournament and our hospitality. Excessive pride begets arrogance, but moderate doses of pride engage the hearts in a positive manner.

3. Create a stage to draw the diverse together

From an historical perspective, rugby has been a venue for cultural engagement. Rugby provided a cultural space for the two founding cultures of the modern New Zealand nation, Mäori and Pakeha (Europeans, mostly British) to literally rub shoulders and play together. Later arrivals from the Pacific Islands have also been integrated into the game. During decades of the downside of colonisation and assimilation, rugby has continued to provide a space for Mäori culture, with the iconic haka, the bilingual expression of our national anthem and, in this tournament, the diverse expressions of Mäori culture in events and ceremonies.

The integration of rugby and other events throughout the country has juxtaposed sports events with diverse events featuring food, drama, fashion, hunting, music and many others.

Contrast this with the perennial business problem of departmental silos. I don’t want to elaborate with examples, but the challenge is to create the stage, or create spaces for engagement with both internal and external stakeholders.

4. Ride the waves of culture change

Culture builds over time. But it isn’t a steady incline. Events provide surges of cultural influence. The combination of the success of this tournament, the quality of events, especially the opening ceremony and our inevitable victory on Sunday night instils a sense of self-belief and optimism. While we need to be realistic, at the same time, if we ride this cultural wave we can make some gains as a nation. The stories of the cup victory will become part of our cultural fabric.

Wise leaders will recognise the waves of cultural change, highlight them and celebrate them.

5. Learn from a great team

This is possibly the greatest All Black team. After our untimely exit from the previous world cup, the services of the much-maligned coaching team were retained for another four years. They appear to have produced a team environment that is supportive, but also stretches individual capabilities. There is a tangible sense of camaraderie and players ably support one another on the field. They have countered criticisms of the past by being able to change tactics on the field, with evidence of a high degree of cohesiveness between the players.

Go the mighty All Blacks.

One thought on “Engaging a nation: lessons from the Rugby World Cup”