The costs of low engagement and ineffective change management 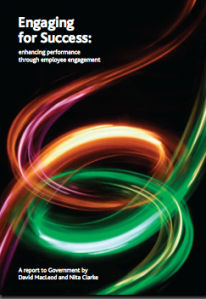 David McLeod, in a report to the British government in 2008 estimated the cost to the UK economy of their low levels of engagement to be between £59 and £65 billion pounds. But low levels of engagement not only have an economic cost; it also deprives employees an opportunity to find meaning, dignity and community in work. This is the social cost; as yet unmeasured but equally important and perhaps even larger than the economic cost.

But these costs say nothing about the cause or the solution to these perennially low levels of employee engagement. I believe the cause of the problem is hinted at by another well known workplace statistic. Many will be familiar with John Kotter’s research findings in 1996 that 70% of organisational change fails to achieve its objective. Fewer might be familiar with McKinsey & Co’s study in 2008. It showed little improvement over the 12 years between the 2 pieces of research notwithstanding the focus change management skills and practice has received over this period.

I think that if we want to see employee engagement scores increase we need to turn our attention to focussing on an approach to managing change that is intrinsically engaging of employees.  In short I think we need to change the way we think about and give effect to organisational change.

So what’s wrong with the traditional approach and what does an alternative model of change look like? We seem to be currently addicted to an approach to change that is predicated on notions of expert knowledge and its association with management control, what Marvin Weisbord calls “learning to do things to or for others” as opposed to “learning to do things with others”.

The traditional model of change is typically one of a few people, mostly managers (at times working with consultants), who generate change proposals and consult with employees affected by the proposal. A common feature of this sort of change is the short period of time employees and their representatives are given to comment on the proposals relative to the time taken by managers and their representatives, to develop the proposals. If the adage Kathleen Dannemiller and her colleagues articulate in their thinking about workplace change is correct – namely that “we commit to the things we help to create” is true –then its little wonder that our levels of employee engagement – a measure of our employees commitment to their organisation, is so low.

This article was first published in the August/September issue of the Human Resources magazine. Part two explores practical means of improving engagement and adaptive capacity for change.

Alex Twigg presented at the recent HRINZ National Conference in 2011. He has extensive experience in employment relations (ER) in a variety of roles including mediation, arbitration, advocacy, facilitator and process consultant. Over the last four years he shifted from operational to strategic ER – focusing on the link between people, process and organisational performance.

Alexander is currently employed by the Department of Labour’s Partnership Resource Centre.  He works with unionised workplaces helping the parties improve their workplace relationships and then help them put those relationships to work using frameworks such as ‘Lean Thinking’ to help both parties achieve their mutual and separate interests.